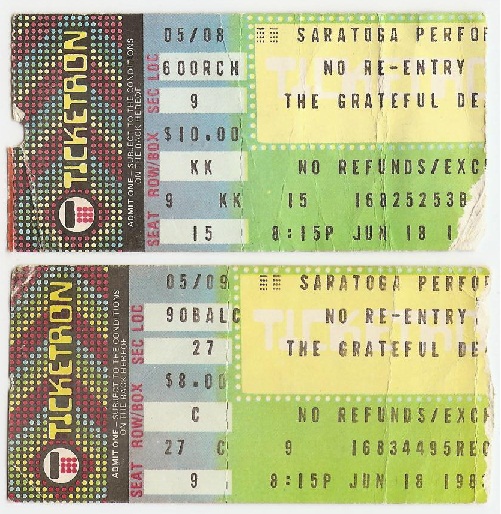 Reviewer: gaZeebo - favoritefavoritefavoritefavoritefavorite - January 19, 2017
Subject: this recording is great
please ignore the reviews here that mention gaps or repeating sections, they just are not true. Andrew is a master at fixing up recordings, and this is no exception. It might be the best sounding source from a venue that was hard to pull a good tape out of.

Reviewer: Deadhead225 - favoritefavorite - July 23, 2015
Subject: Major Probs with this source
I was listening to this version of this show today. There are major issues throughout the 2nd set. Many portions of many songs were patched in a totally screwed up way so as to repeat significant chunks of those tunes (Scarlet for instance. Also check the end of Deal). If you have intuitive knowledge of the show from many listens, it is obvious and really irritating. Sound is good, but once you tune in to the cuts/repeats it is not worth it.
The first set is just bad. Althea is lackluster despite crown enthusiasm and Bucket is just a disaster.
Stick to the awesome 2nd set and another source.

The first set really just
Reviewer: nfagdtrfb - - August 22, 2013
Subject: stupid me
"You might want to learn how to NOT have breaks between tunes. It's actually quite simple and makes for better listening."